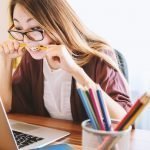 A letter to your boss asking for time off

In the IELTS general training, you will need to write a letter in writing task 1. It will be either formal or informal. Take a look at the model answer below for a formal letter asking for time off from your boss. This is written in a formal tone because a letter to your boss is always formal.

General Writing Task 1: Model answer for a letter to a friend about work issues.

If you are doing IELTS general instead of the Academic version then you are lucky. In the general section, you only need to write a letter and it will be either formal or informal. There is a semi formal style but if you are writing to a friend, even if it is in a business setting, then just write informally.

In the Academic version of IELTS you will get one of the following: a bar chart, pie chart, line graph, map, process diagram, table, double task (pie chart and table for instance) so the general IELTS writing task 1 is much easier.

Let’s take a look at the task question below about an IELTS general letter to a friend.